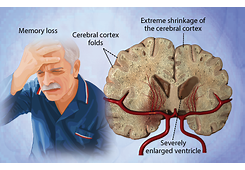 Dementia is a scary diagnosis! And so, we put it out of our minds and only begin to worry when we walk into a room too many times and realize we forgot what we came for.  We walk around secretively worried that we might have Dementia.  What we need to do is to stop avoiding the topic, turn around and just face it "head on".  No pun intended.

To know the enemy is to name it and "Dementia" is a state of global cognitive decline in a person; with short term memory loss presenting as an early warning sign. Thus, the common, “I forgot what I walked into this room for“ complaint may or may not be the true beginnings of Dementia.
Usually, true Dementia is a progressive decline associated with difficulty reading, writing, speaking, following conversations, reasoning, planning, organizing and/or calculating. It generally is noticeable to the individual first, then perhaps, up to 10 years later, to others.

Dementia is also being called Diabetes Type 3. NEWS's paradigms have always incorporated the belief that Insulin Resistance begins 10 to 20 years before the diagnosis is made: intuitively we have been helping people learn how to control Insulin Resistance since NEWS began in 1994.
Dr. Bredesen's book, The End of Alzheimer's, shows, through the science he presents, that lifestyles and exposures contribute to the rising rate of Dementia.
Thus our time-honored office goal and belief that Dementia is prevented by teaching Optimal Lifestyles seems paramount in helping to prevent this chronic health complaint.
‍‍
What types of Dementia are there?

Alzheimer’s Disease:
- Is the most common dementia which makes up 60 to 80% of all dementias.
- Prodromes do exist for Alzheimer’s and this is where intervention has the greatest impact to at least slow down the course of full-blown Dementia.

These Pre-Alzheimer’s prodromes consists of:
Subjective Cognitive Impairment (SCI):  where the individual knows something is wrong but cognitive testing is still normal.  PET scans and CNS tests may be abnormal with MRI showing brain shrinkage. This can persist for 10 or more years before progressing to the next stage called Mild Cognitive Impairment (MCI)
- IF, you want to test for this diagnosis on your own..... don’t! Get professional help but choose someone who understands the new protocols and how to work with the findings. Remember, more can be done today than yesterday and tomorrow we will be able to do even more.

Vascular Cognitive Impairment(VCI) or Vascular Dementia: VCI is due to Cerebrovascular Disease (CVD) where blood flow is cutoff or decreased to areas of the brain from thrombi blockage or narrowing from plaque buildup in the vessels of the brain. We know the underlying precursor, atherosclerosis, is related to CVD. We also know that intimal thickness testing can give you an idea of your plaque burden. Thus, obtaining your intimal thickness by doing a Carotid Doppler with Intimal Thickness, which we offered in our office, is so important.

Frontotemporal Dementia: Incidence is 2.7–4.1/100,000
It’s a young-onset dementia usually diagnosed between 45 to 65 years of age and consists of a loss of nerves in the brain’s frontal and temporal lobes which cause deterioration in behavior, personality and/or difficulty producing or understanding language.

Currently the cost of Alzheimer’s Disease is over $220billion annually in the US and a trillion-dollar cost to global health.
‍
On a more personal level, back in 2012, when I was looking to move my mom from an “assisted living facility” at around $3000/month to a Dementia Care Unit at $5000/month, I was hit with an unexpected cost of a “personal caretaker”. Seems the Dementia Care Unit in no way cared for her personal needs and that would be an additional cost that I had to find on my own. I figured the caretaker cost at $20/hour for ten hours/day would minimally DOUBLE the cost of her “Dementia Care” to $10,000 a MONTH!!
My first thought was, she never saw the cost of this coming; but neither had I. Her meager savings and social security check didn’t even start to cover these costs. My second thought was, “We don’t even spend this much on growing our children.”
According to Google: “The cost of raising a child has increased in the last year, according to a report from the Department of Agriculture. For a middle-income family to raise a child born in 2015 through the age of 17,the cost of rearing a child has hit $233,610, according to the report. Jan 9, 2017”
That $233,610 would have lasted 23.4 months for my mother.  So, I did what so many families are doing, I took her out of the medical care model and moved her back into my home for the next three years and found caretakers she and I could afford. They sat with her while I worked and I cared for her my self the four days I had arranged off from work.
Dementia’s debit is paid not just by money, but by love thru time, talents, and lives of its caregivers. Dementia holds all the ‘Bitter-Sweet” juices of life that eventually are understood only by its surviving care givers.
‍
But, back to the article…...
Until we do have a drug that can slow down or reverse Dementia, it seems that only thru understanding the basic physiology and putting in a lot of hard work to change some "bad" habits and start some “good" habits will we begin to pass this hurdle.

NEXT ARTICLE:  "Make a diagnosis of Dementia first" - Part 2
‍