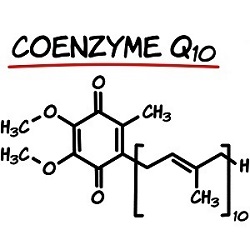 Ubiquinol - a form of CoQ10 - and heart failure

For years now, NEWS has been telling our patients to use Ubiquinol (UBQH) when their NT-proBNP was high or high normal on our routine lab testing!

NOW there is research to prove that our “Evidence-Based” action was warranted.

Ubiquinone (Oxidized CoQ10) and Ubiquinol (Reduced CoQ10) are forms of CoQ10. In OptimalAging we want to normalize low levels of reduced CoQ10, which is an electron donor, to our “energy producing” system the “electron transport system”.

Medicine knows that patients with heart failure have increased levels of the N-terminal pro-brain natriuretic peptide (NT-proBNP); and these levels are known to increase with disease severity.

Combining these two knowns, when the NT-proBNP begins to increase, energy production in the heart lessens and your need for Ubiquinol increases! Thus, when indicated, we have been supplementing Ubiquinol (UBQH) for years with our patients.

The published study found at, http://www.ncbi.nlm.nih.gov/pubmed/25728634, showed “a negative association between serum levels of Ubiquinol and NT-proBNP (P < 0.001).” This means that as the NT-proBNP in the blood begins to increase, Ubiquinol levels decreased and heart failure increased.

They also showed that “Ubiquinol supplementation of only 150 mg/day and for only 14 days in 53 subjects “slightly reduce[d] the expression of CLCN6, a gene related to NT-proBNP level.” So perhaps Ubiquinol “turns down the gene” making less NT-proBNP but it may also donate that electron to energy production which stresses the heart less making some other feed-back loop possible.

Whatever the relationship, they end by saying “to what extent a high serum level of Ubiquinol is a protective factor for heart failure remains to be elucidated in prospective studies.”

To us at NEWS, we don’t want a “high Ubiquinol” level; we just want it to be normal.

The body is so complex that the “one size fits all” and the “if a little is good, then more is better” mentalities won’t work! My need for UBQH to “normalize” my NT-proBNP is going to be different than the next persons and I need to measure it to be sure that I am OptimallyAging.

Knowing that NT-proBNP is a reflection of heart failure is Proteonomic Medicine and that a gene called CLCN6 may be implicated in this protein production is Genetic Medicine. Now what happens if we determine at birth you have the CLCN6 gene and you are low on Ubiquinol? Supplementation manufactured just for you might SAVE you from heart failure as you age as long as you take the supplement. Going one step further, modifying the gene at conception would mean not having to take supplements at all; but we can’t do that ……yet!