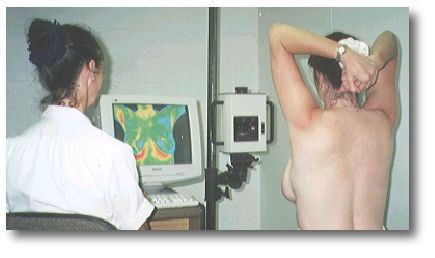 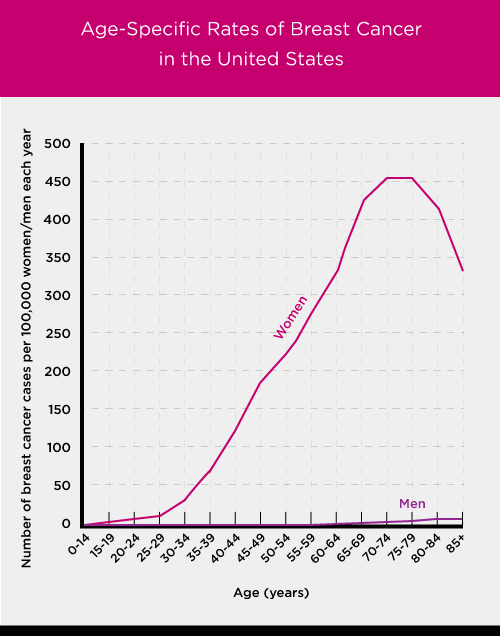 Data source: SEER 2011-2015 [2]  Note: Though this graph shows a rate of 0 in some age groups,  there are a few cases of breast cancer in these age groups. The numbers are too small, however, to appear on the scale used here.

Mammograms accurately diagnose Breast cancer in about 78 percent of all women tested, while diagnostic accuracy rises to about 83 percent for women over 50.(3)

Mammograms use radiation to make diagnostic decisions about performing a even more invasive procedure to "rule out" breast cancer. The radiation itself is a carcinogen.
Thermograms DO NOT diagnose breast cancer, ever. They instead reveal "physiological" changes that suggest a change in the vascular system of the breast that may indicate a "problem" anywhere from hormone imbalances to an infection, a cyst or possibly a cancer. Further procedure(s) is/are necessary to DIAGNOSE what is going on.
Thus, Digital Infrared Thermal Imaging 'DITI' is a "adjunctive non-invasive test of physiology (or function)" that offers an increased opportunity of early detection.  The screening is done without any pain, no radiation, or compression! ​
However, as you know, no breast test is 100% accurate. So it is important to consider a multimodal approach. Clinical trials have shown that Thermography significantly augments the long-term survival rates of its recipients by as much as 61%.(4) And when used as part of a multimodal approach (clinical examination, mammography, and infrared imaging) 95% of all early stage cancers will be detected.

A Thermogram is a test without any exposure to radiation that is used as part of an early detection program which gives women of all ages the opportunity to increase their chances of detecting breast disease at an early stage. It is particularly useful for women under 50 where mammography is less effective or in women with breast implants.

Dr. Schultz has been offering Thermography from NEWS for close to 20 years now. She likely has been offering this modality for the longest time span of any physician in the US. Why?.....Because she had too many women in the 1990's who did not want to radiate their breasts. Instead of offering them nothing, the "Thermogram with MediTherm" seemed safer than doing nothing at all.
While the 3D-Mammography of today is better for younger women with dense breasts, we still have the radiation to deal with. One day, in the near future, we will have a diagnostic blood test for that. For now, however, doing a baseline Mammogram in conjunction with a baseline Thermogram provides better assessment. After initial diagnostics and according to the risk assessment of the individual woman, it is suggested to repeat Thermograms every year a Mammogram is not done. Mammography guidelines recommend assessment every 1 to 2 years.
So what is a woman to do? Well let's remember how often opinions have changed over this very subject during the last 20-30 years.
In October 2015, the American Cancer Society (ACS) issued new recommendations that concluded that women at average risk of breast cancer start mammography at 45. ACS also advised women undergo annual mammograms from 45 – 54, and repeat mammography every other year after the age of 54.
Nothing is perfect; but a Self-Breast-Exam every month starting in your 20's, a Mammogram every 3 to 5 years from the ages of 40 to 75 [which is only 12 to 8 Mammograms], and Thermograms interspersed, seems a safer multi-modal option. While this is Dr. Schultz's personal plan, she takes into account your individual risks, and then advises a plan for you based on those risks at your consultation.

Our Thermography Partner is Mobile Thermographic Imaging (MTI) out of Atlanta, Georgia. They are MediTherm trained and belong to the ACCT American College of Clinical Thermology
They come to our office usually every other month and we ask that you call their office to schedule an appointment.
Mobile Thermographic Imaging Contact Information:
‍Main Office: 678-688-8986 | office@mobile-thermographic-imaging.com
‍Janique Cook, Co-Owner & Administration: 678-852-8548
Angelique Scibetta, Co-Owner & Accounting: 678-773-6563
‍Brandy Jackovitch, Office Manager: 404-790-3457